Review of 'She Loves Me, He Loves Me Not', author Zeenat Mahal

She didn’t seem to mind looking at him. She didn’t even avoid looking at his face , or cringe in revulsion. If he didn’t know better, he could almost forget his own grotesque reality, the way she looked at him. 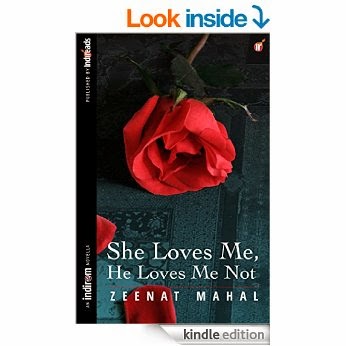 Life has not dealt Zoella an easy hand but she accepts what comes her way with a smile and tries to make the most of it. Fardeen on the other hand is the original golden boy, born with a silver spoon in his mouth. Rich, successful, more attractive than what is good for him he has the world at his feet. Zoella who is a good friend of his sister Swaba, has fairly grown up in their house and knows she is just one among his legion of admirers but Fardeen has eyes only for his fiancée Neha.

This bubble bursts when Fardeen meets with an accident and is badly disfigured. Shunned by his fiancée, a bitter Fardeen locks himself away from the world convinced he is good for no one and not ready to even try.  A series of events cause them to be married: a marriage Zoella knows is purely of convenience and one that Fardeen views with utter disdain. Is this how Zoella’s life is destined to play out , tied to an embittered , cruel man whose only aim in life seems to be to cause as much pain to everyone around him as he is going through himself?

Zeenat Mahal excels in her descriptions, be it kite flying on the roof tops of Lahore, or the hustle and bustle of a wedding house or other little vignettes through the story. She subtly emphasizes and brings out the nuances of social dynamics within a family and between couples. I absolutely loved the character of Fardeen. He was marred and broken and at the end so very real, that he fairly jumped off the pages at you. I did not find the same thing happening with Zoella. She seemed too much of a martyr and too one dimensional for me to really like or understand her.  This I found to be a weak point in the book from my perspective. This was saved by the ebb and flow of the dialogue between the two main characters which was funny, witty, poignant and romantic.

I would give it four stars as it’s got a good plot that picks you up and takes you with it keeping you interested throughout.

Email ThisBlogThis!Share to TwitterShare to FacebookShare to Pinterest
Labels: Contemporary Romance, He Loves Me Not, Indireads, She Loves Me, Zeenat Mahal