What do we do with our secrets?

Set in the suburbs of Sydney, Liane Moriarty picks up the silken strands that are the lives of Cecilia, Tess and Rachel and laces them deftly together over the ‘Easter Week’.
Rachel’s daughter was murdered when she was seventeen, a tragedy she has still not come to terms with over twenty five years later. She now faces the daunting prospect of her grandson moving away. Tess finds out that her husband and her best friend who is also a much cherished cousin are in love with each other. Shattered, she retreats to her mother’s house in the suburbs with her son. However, it is Cecilia; the one with the perfectly organized life, the one who always seems to have it all together, who finds ‘the letter’ from her husband. Will she open it or not?
Over a period of just seven days we have events from their lives woven together with a skill that would have made Athena proud. Circumstances, decisions, consequences and the circle goes on.
This was a sizeable book, it was set in the suburbs and there wasn’t any great mystery here despite what the title suggests. On the face of it there was nothing that should really grip your attention but enthrall me it did. I couldn’t put it down and I was surprised myself at how fast it went. Kudos to Liane Moriarty for being such a great story-teller.
She draws you into the perfectly ordinary lives of these women and you don’t even realize you have actually been pulled into the room with them. Fear, lies, loss, weakness, adultery she throws them all at you and it eventually boils down to the choices these women make in their lives. What I appreciated is that the characters were not black or white, they were human with all the foibles that humans have and Ms Moriarty just presented their story, she never judged them. That she leaves to us.
The only part which I question is the need for the character of Tess and her story. It was a great story but I didn’t quite get the connection with the main plot. Also the ending felt too much like a ‘done and dusted’ affair. Minor drawbacks at best.
It categorically deserves a five star rating and what was the icing on the cake for me were the brilliant little truisms’ that her characters come up with either as snippets of conversation or in their thoughts. E.g. one from Cecilia


‘She’d learned that with her daughters. Don’t say a word. Don’t ask a question. Give them enough time and they’d finally tell you what was on their mind. It was like fishing. It took silence and patience.’ 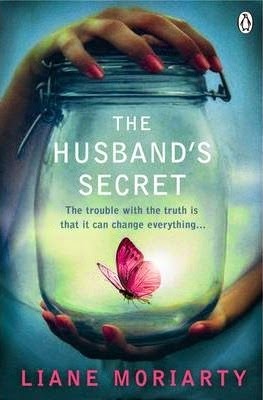