REVIEW OF THE LIGHT BETWEEN OCEANS BY M.L.STEDMAN. 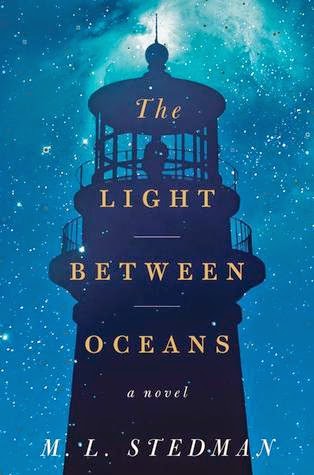 Tom Sherbourne takes a job as a light house keeper on a remote island off the western coast of Australia to escape his nightmares and guilt for returning alive from World War I. Isabel is the Head Master’s daughter in the small town nearest the lighthouse.
She has her eyes set on Tom from the very beginning and despite Tom’s misgivings he agrees to marry her and take her to live with him on Janus Rock. Life is idyllic till Isabel has a series of miscarriages which in a heightened emotional state she blames on the island and their life there; even though she is the one who continuously refuses to seek medical help. In this tense atmosphere, a boat is washed ashore with an infant in it. There is a man in the boat as well, who is dead. Despite his serious doubts about the morality of the situation Tom is persuaded and manipulated by Isabel to keep the baby and raise her as their own. They have the perfect family life shut off in their own little cocoon till they come to know whose baby she really is. Fierce as a tigress, Isabel is ready to hold on to her daughter and not let go come what may. It is Tom who treads the higher moral ground and is torn between his love for Lucy and Isabel and doing what is right. He finds it all the more difficult when he realizes that he has met her biological mother before and sees the state she has been reduced to by the tragedy of losing her only child.
He tempts fate by sending messages to Hannah and is eventually caught. This causes the three main protagonists to be sucked down into a vortex of anger, desperation and guilt from where there seems no escape. A tender heartfelt story of how we fool ourselves to believe what we want to believe, how we build up chains of lies around us, how we take decisions that are impulsive and that haunt us for years to come and the all important question at the end; if we had known what were to follow, would we have done things any differently?
It’s a beautiful read about people, relationships and their emotions. The author paints a vivid picture of the little town and the era it has been set in, of the war veterans and the scars they come back with, of the effect on the families of these men. She is unsurpassed when she talks about the little island and the life of a light housekeeper. I say this, as it is such a dry subject which she has breathed life into. I loved the female characters; the human foibles and effervescence of Isabel; the forlorn drifting of Hannah, the ambivalence of Gwen, carefree, spunky Grace/ Lucy; they all strike a chord. However, I would not say the same thing about the male characters Tom was this good, stolid man who was so ridden with guilt that he seemed to have no voice or wants of his own, besides always being morally right. Hannah’s husband was this amazingly forgiving man who always found the bright side in everything. At the end I found both these characters boring with their martyr’s complex. The one male character who was vivid and attention grabbing was Septimus (Hannah’s father). Unfortunately he didn’t have too big a part in the story.
The other thing I thought was uncalled for was the last few pages. Here was this thoroughly engrossing read and then I got to the end and I felt somebody had decided that everything needed to be dusted and tied up with little blue bows. It was absolutely brilliant without it.
Despite these shortcomings, the story came together wonderfully well and even though it was not an action packed saga, it did grasp me and time flew as I read it. It is for this that I give it four stars and definitely recommend it as a captivating read.