Review Of 'An Autograph for Anjali' by Sundari Venkatraman.


Anjali, Jayant and Parth, you would think it is the same old love triangle but it isn’t. I would rather think of them as three separate bodies with their own little orbits.
Jayant is the very self-centered, business-man husband and Anjali is the wife who starts off as a dominated, dutiful wife and gradually comes into her own. Parth is the dashing, worldly author who retains his gentle core; even though life has thrown him some hard knocks. Then there is Arjun; Anjali and Jayant’s son, who brings a calmness and balance to the story and serves as a bridge connecting all these diverse characters.

The book starts with the discovery of the murdered body of Jayant and then the rest of it is about how matters got to that point.

The first thing that struck me about this story is that even though Jayant is painted as a completely selfish character, (I do not go with the traditional Indian male bit as I feel an Indian male can have traditional values but that does not necessarily mean they have to be as selfish as Jayant was) yet Sundari tries to bring in a sense of balance in his portrayal through the eyes of Arjun, who understand where he comes from. Anjali has lived vicariously throughout her life through the life of her husband and son and yearns for change. However, when she reaches tipping point, she prefers to make her journey to the light at her pace. Sundari has not allowed the story to slip into total clichéd territory of an abusive relationship or a love triangle. Despite everything, even Jayant has his boundaries and he knows it.

The second part is how Ms Venkatraman has dealt with the mental health issue. She has aptly brought out the causes and effects of these issues and how they tend to be viewed unfortunately by the general public and deftly woven it into the story. This is another reason why I like reading Ms Venkatraman's books; she always has some strong underlying issue in her books which she does not gloss over but rather deals with it in a very sensitive manner.

The strong part of this plot is the romantic parts. Romance is Sundari Venkatraman’s forte and she has proven that yet again. Those parts are soft, sensual, poignant and exciting. Anjali and Jayant are two very strong characters in the book and if anything Parth seems to suffer in comparison, which is rather odd as there, is a lot of word space devoted to him as well. However his character somehow doesn’t quite jump off the pages the way the other two do.

At the end I would like to borrow the words of Arjun, ‘it’s just two people who are very different from each other’.

AN AUTOGRAPH FOR ANJALI
by
Sundari Venkatraman
Published by Flaming Sun 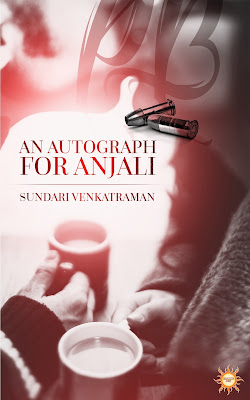 Jayant Mathur is found murdered in his bed, shot at point-blank range with his own revolver. Though she’s extremely disturbed by his death, Jayant’s wife Anjali is way more upset about something else. Who stands to gain by killing the multi-millionaire businessman?

Parth Bhardwaj is a friend and neighbour of the Mathurs. Parth is an author who goes by a pseudonym. He appears more than a friend to Anjali; while he’s also on good terms with her son Arjun who lives and studies in the UK. What role does he play in Anjali’s life? Jayant’s relatives are curious to know.

Jayant’s brother-in-law Rana is convinced that Parth and Anjali are the murderers. But Inspector Phadke has his own doubts about this theory. In comes Samrat, the private detective who appears as quiet as a mouse. Will he be able to find the murderer?

Will Anjali find happiness and peace? 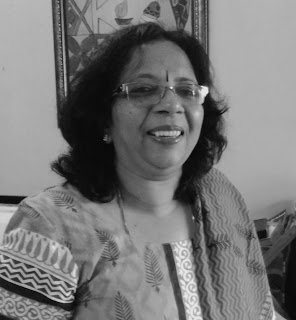 In 2014, Sundari self-published The Malhotra Bride (2nd Edition); Meghna; The Runaway Bridegroom; Flaming Sun Collection 1: Happily Ever Afters From India (Box Set) and Matches Made In Heaven (a collection of romantic short stories).

2015 brought yet another opportunity. Readomania came forward to traditionally publish this book - The Madras Affair - a mature romance set in Madras.

An Autograph for Anjali, a romance with a touch of suspense, is also a self-published novel. Going a step further, the author has published the paperback version through Notion Press.


Every day new links and tasks will be added. Follow The Tour Hosts of ATUW by +Sundari Venkatraman

We Promote So That You Can Write