Not so 'precious' after all 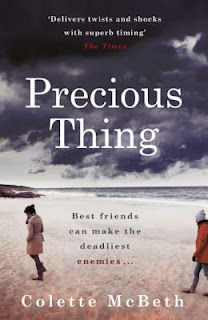 I have a grouse with Gillian Flynn, after her thriller every second FPM (Female psychological mystery) is touted as a story in the tradition of Gone Girl’. The blurb of this book made the same claim vis-à-vis a quote from the Sunday Mirror. I think they would have done much better if they just let it stand on its own; as it builds up too many expectations.

Clara and Rachel have been friends from school. They did everything together and Rachel can’t believe her good luck that Clara actually recognizes her as a friend. Right from the first chapter we know that something has changed in their relationship. Clara is back after being sent away for treatment and she is different now, she is cold and aloof and wants to cut herself off from Rachel who despite being a successful TV anchor in her own right wants nothing more than having Clara as part of her life again.
Clara seems to relent but then she disappears as does Johnny, Rachel’s boyfriend.

The story keeps skipping from past to present to try and give us some background of the two girls. There are smoke screens and red herrings but somehow the book never ever seems to pull off the deep, menacing atmosphere that Gone Girl’ managed or the twists and turns in the story either.

I give it three stars because I liked it (in parts) but not enough to recommend it to someone else to read.